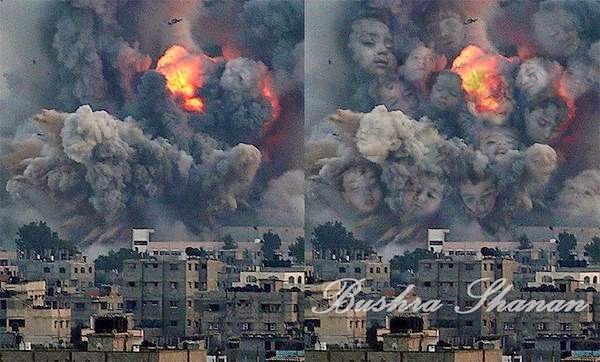 Gaza, July 16, Israel launched a new aggression\operation\offensive against Gaza and decided to name “Protective Edge” also known as “Solid Rock”. Israeli warplanes, tanks, drones and warships participated in bombing places across Gaza all day long. This makes it the third Israeli open war against Gaza in 5 years or less. This isn’t a report, this is a personal account of what I lived today through the seventh and eighth day of Israel’s new aggression on Gaza.

NOTE: Due to lack power and too much news to track, I stopped for a while but I am trying to make up for it now. Blogs of the past few days will be posted successively.

Israeli warplanes, tanks, drones and warships have been participating in bombing places across Gaza for ten days now. This makes it the third Israeli open war against Gaza in five years or less.

Every night I seem to think it’s the worst night, until I go through the next one. I got so used to the house shaking and moving from the consecutive blasts that now it feels weird when everything is still. Flashing lights, the ground shaking all around, that’s my house during the current Israeli war on Gaza.

Every day, Israeli warplanes bomb a new house. A mosque is hit. A car is blasted. A hospital is attacked. Even cemeteries and handicap associations are no longer safe. Every day, new people die, people who were once alive with different hopes and dreams, are now nothing but a number in a news report. From life to statistics, that’s how vulnerable life is in Gaza right now. Who knows who is about to become a number, and when?

When you live in a conflict zone, like Gaza, experiences force you little by little to create the best “dos and donts” warzone guide book. First, the autopilot mode is ignited. You stock up bread, water, canned food, medicine and first-aid kits in no time without even thinking about it. You know which is the “alleged” safest spot in the house - usually the corners - and you know to stay away from windows and doors. Safety in Gaza is always missing and never found, but you use whatever means you have.

The question discussed among most of Gaza’s homes and neighborhoods has been around ceasefire or no ceasefire? My neighbors from one side are with it; they got tired and can’t handle any more madness. My neighbors from the other side are against in; singing melodies of how strong Gaza is. I, on the other hand, am sitting in the middle wondering when will I see the beach here again, or will I ever?

Gaza is like one small village where everyone knows everyone. Everybody is related one way or another. And those who you don’t know in real life, you befriend through social media, essentially turning Gaza into a home, not a village, which helps significantly when it comes to finding out what’s happening, and trying to figure out what to do. But even with these connections, it doesn’t change the fact we’re still faced with limited options.
Two nights ago, for example, many of my friends received Israeli recorded evacuation calls, all of whom live in the same area I live in. We realized quickly we needed to formulate a ‘safety’ plan, but in order to form a plan, you need to understand the very real but almost comical situation on the ground. Imagine this scenario: Nalan Al Sarraj, who lives in Tal el Hawa, tweeted that she got an evacuation call and was heading to her friend’s house which isn’t so far. While I didn’t get a call myself, we still worked on scenarios of what we should do. Say I got an evacuation call and went to seek refuge with a friend, they might already be out of their house because they too got a call. We both then would seek refuge with a third friend, and while we are there, he gets an evacuation call. “Where should we all go?” a question myself, Nalan and many others keep asking.

Truth to be told, nowhere in Gaza is safe. Some refugees sought refuge in UNRWA schools, but these were bombed by Israel during their “Operation Cast Lead”.

People living on the borderline in Gaza get evacuation leaflets, calls and warnings everyday to leave their lives and home behind and evacuate. Not enough UNRWA schools to seek refuge at. And the strip is already condensed hence the dramatic numbers of fatalities and death.

Living here long enough, trapped for days sometimes because of wars or attacks, I’ve realised I’ve become an expert in sound. Now, instead of getting bored of seeing my family and neighbors all day every day for days, I decided to develop this skill, and now I can differentiate between rockets and their sounds\ impact.

Say there is an Apache is nearby, very loud roaring above the house, that’s bad right? Yes and no. It’s a good thing in one way because it means your house won’t be targeted. Unfortunately it also means another house will be targeted from a place in the air above your house. Also, Apache rockets are mild in comparison to the loud, devastatingly damaging and explosive F16 rocket.
Blasts have different sounds too. A tank shelling, for example, doesn’t sound like a warship shelling. Then there is this sudden huge blast, caused by an F16 rocket, it will take your breath away, literally. F16 blasts give mini heart attacks. But that’s only if you are lucky. If it’s closer, you are probably flying due to this sudden blast. There is also the sound of actually hearing the missile falling and then a blast. That’s the best and favorite kind among us all here. Hearing the missile fall means it probably won’t be targeting you.

I jump even when the door slams. There is a buzzing in my ears now as a result of the proximity of the explosions. My heart stops for a few seconds each time I feel a blast. I haven’t slept for nine nights, and I’m fasting during the days. My mind and body are in overdrive; tracking the news, preparing for an evacuation to I don’t know where any second now, preparing to die, stuck at home. My fear now is that I turn into a zombie.
At least 213 Palestinians have been killed at the time of writing, and a further 1565 others injured. Two new massacres were committed by Israel today against the Abu Dagga and Baker families. Seven fatalities from which five are children. Four children alone, brothers and cousins from Baker family, aged 9-11, were hit by an warship shelling on Gaza seaport, Western Gaza. Heartbreaking. My humanity is hanging by a thread, especially after I hear such news.
Don’t people in Gaza deserve to have human rights? Not even the children?