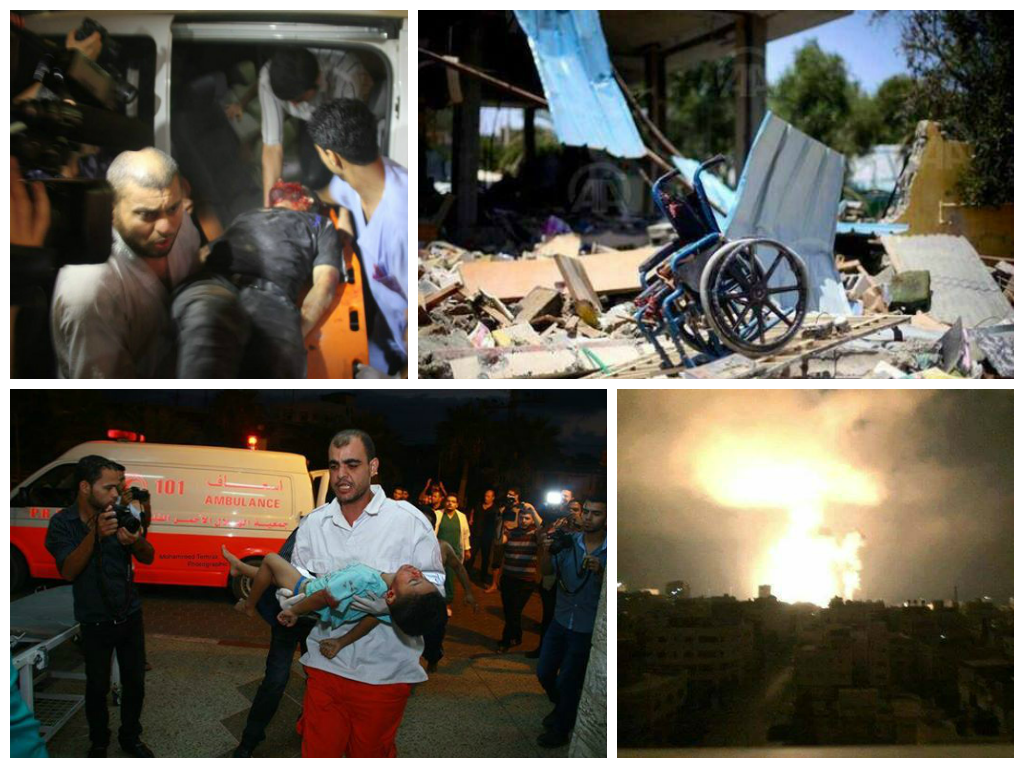 Gaza, July 14, Israel launched a new aggression\operation\offensive against Gaza and decided to name “Protective Edge” also known as “Solid Rock”. Israeli warplanes, tanks, drones and warships participated in bombing places across Gaza all day long. This makes it the third Israeli open war against Gaza in 5 years or less. This isn’t a report, this is a personal account of what I lived today through the fifth and sixth day of Israel’s new aggression on Gaza.

I apologize for skipping day 5, I will be writing about both day five and six both. I had no time yesterday due to power outages, a little sleep and the intensity of the bombings. Too much news to track, allot of things to do. You try your best to keep up, sometimes your best isn’t enough.

Before I start, I would just like to say that I wish I was writing this out of propaganda, I wish we weren’t living through this brutality and I wish it was just lies I am making. Its not. You can easily Google the information now and see not only pictures but videos of what is Gaza going through. And for those who challenge my state of being a civilian, check what a civilian means and how its define by international standards, if you have a problem then blame them not me. Call me “not a civilian” all you like, I am a civilian and it is a fact.

The last two nights were intense. Many explosions nearby to an extent that I felt my ears will fall off. But how dare I complain about anything when whole families are being killed and Gazans have become refugees in their own country. Many families left their homes in the north seeking refuge in UNRWA schools, not that its safer or anything, Israel bombed them during cast lead. An estimation of four thousand people, left everything behind seeking some peace of mind, since safety is nowhere to be found in Gaza. No where is safe.

Israel committed many massacres, new and old ones, during all wars and times of no war. Latest one was Al Batsh family. A multiple-storey house was bombed. NINETEEN were killed and more than fifty others injured. All from the same family. Imagine losing your mom, And your dad, And your siblings. Oh, And your relatives. Oh wait, there is more, And your neighbors. If you were lucky to survive this, your whole life that you once knew has ended. Maybe those who survive are unlucky. I don’t know. Imagine waking up to find your whole family dead, your house was destroyed, even your neighbors and relatives are no longer there. Would you say: Thank god I am alive?

Mothers, daughters, grandmothers, kids, elderly, families, men, boys, girls, handicapped, sisters, brothers, relatives, neighbors, and friends, all are being killed. If you were lucky enough not to lose a member of your immediate family, you will def. end up losing a relative or a neighbor or a friend.

172+ Palestinians killed, 1150+ injured, 2500+ Israeli attacks on Gaza (360 square meter of a highly populated strip), nearly 750 houses\mosques bombed, destroyed or severely damaged. Houses. Mosques. Medics. Hospitals. Ambulance centers. Cemeteries. Farmlands. Coastline. Shore. Boats. Cars. Motorbikes. Buses. Residential areas. Banks. Schools. Colleges. Universities. And pretty much everything. Depressing huh? Well, that’s what we are going through. According to UNRWA, an estimation of about 70% of the fatalities are civilians, from which 30% of them are children. I think the percentages are even higher. Don’t believe me? Google UNRWA and Chris Gunness.

I still cant get over the bombing of cemeteries (3+), like the English cemetery in Gaza. And also the handicap association. Even handicaps are not spared. Three handicapped females were killed. Human rights much?

As we enter a week into protective edge, or Israeli ongoing aggression on Gaza, you feel a shift. Being under siege and occupation for so long makes you adapt very fast to any current situation, bad or good, which is totally unhealthy. The first few days we were in denial, then we started adjusting and now we are used to it. Yesterday, people were leading normal life in the daylight, nearly, which kind of confused me. I was sad, happy, confused, frightened and puzzled.

Now if a huge explosion hits nearby, its like: “Uhm, yeah that was near”. With no shock or terror. We got accustomed to this and its sad.

Here are a few types of explosions I noticed during this war:

1- Sudden blast. Just a huge big “KABOOOOOOOOMBOOOOOOMPAAAAAAAW” out of no where.

2- Hear a missile penetrating air and then “KAAAAAAABOOOOOOM”.

3- Hear a missile falling and then the ground shakes.

7- And finally, the big F16 gigantic rocket. If you are lucky enough to just hear it without getting dead or injured.

This will sound crazy, but we all favor type “2”. We prefer to anticipate death instead of getting blown up with no further warning. We think its safer, when its actually not safe. But hey, if you hear a missile falling it means you’re lucky, its near you but not targeting you.

Every time the phone rings, you assume you will get a call from Israeli army to evacuate your house, if you are lucky. Although now Israel uses the new “Warning missiles”, yeah warning missiles, you heard right. They bomb the house with a warning missile, if you were still alive, you have 1-3 minutes or less to leave. If you were lucky. Many houses got bombed with no warning missiles, hence the huge numbers of deaths and injuries or fatalities and causalities if you want fancier definitions. I don’t.

Homebound for a week now. I try all ways with my family to let me go out. Its always a big fat resounding NO. I tried negotiation with my dad, using Maya Angelou quotes of empowerment, beg, childish sounds, fake tears, threatening to do it behind his back and finally I played the “Adult” card. You would think this powerful card would have an impact on my dad, right? NO. He said if I was an adult I would know better than wanting to go out during these difficult times. He is right. I put my head down and dragged my defeat away with me.

Every morning I hear the birds chirping and the sun filling the place, I miss Gaza. I miss the beach. I miss the freedom of choice whether I want go out or stay home. I miss my favorite places here. I miss my friends. I miss the streets and the feelings. I miss walking around. Seeing your family for a week, every day, nonstop, while you are homebound and under war is kind of a challenge. I hope none of them read this entry. If they do, I hope they know I love them, but I need space (or a change of face) so I hope they don’t end up hating me. What? I promise my readers here brutal honesty.

It hurts when you see children die. People with names, lives, families and a being turn into numbers. A statistic. Its like you can smell death, overshadowing the smell of gunpowder. Its like blood is running through the streets.

Life was never normal here, ever, by all means, but I miss my normal life, whatever that was before the Israeli ongoing war. Every day you live through the fear of losing a loved one. Its nerve wracking.

As usual, the house was all shaking while I was writing this blog entry. Or diary. Whatever you want to call it. Explosions in the background. Like I am watching an action movie, but instead of watching it this time, actually living it.

Once again: A shout out to medics, nurses, doctors, journalists on the grounds and everyone who risk his\her life for the sake of others. Heroes is a cliché, so you all deserve a better definition.

And A shout out, also a HUGE thank you, to all the big numerous protests around the world in support of Gaza. We love you.

Let’s see what the 7th day will bring, if we live to see it.

From beautiful Gaza, lingering to hope,

Omar
Posted by Omar Ghraieb at 7:23 AM