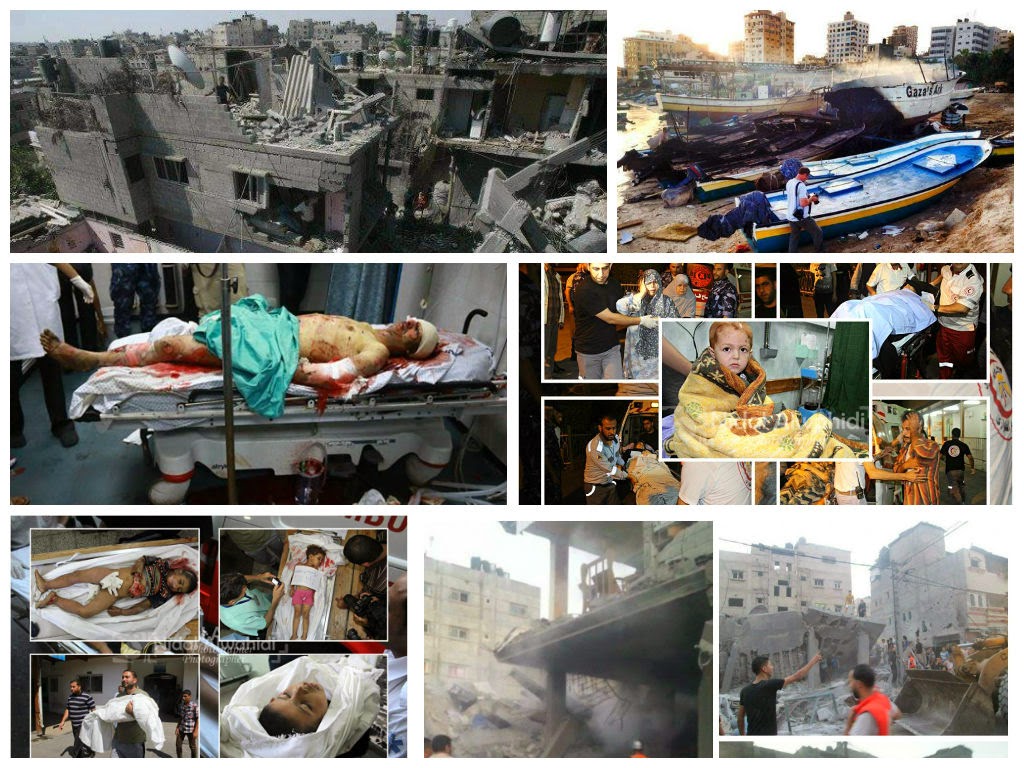 Gaza, July 11, Israel launched a new aggression\operation\offensive against Gaza and decided to name “Protective Edge” also known as “Solid Rock”. Israeli warplanes, tanks, drones and warships participated in bombing places across Gaza all day long. This makes it the third Israeli open war against Gaza in 5 years or less. This isn’t a report, this is a personal account of what I lived today through the third day of Israel’s new aggression on Gaza.

Third day is over, it was yet more intense than the second day. Israel didn’t stop bombing Gaza for a second, consecutive explosions spread across Gaza shaking the ground under us. Israel used Apaches, drones, F16s, warships and tanks against Gaza. Israel expanded its targets in Gaza and bombed houses, school, university, hospitals, cars, media, motorbikes, bus, mosques, A CEMETERY, humans and pretty much anything and everything.

Its getting a little boring to stay homebound and depressing to watch Israel commit repeated massacres like Kaware’ family (bombed a house while people where around it forming a human shield to protect it), Khan Younis beach Café, Ghannam houses and others. Five to eight people were killed, or even more, due to every massacre and many others injured.

What bewilders me is those illogic bombings on ex-Gaza international airport that Israel already flattened to the ground so many years ago, yet this airport, in Rafah, Southern Gaza, got hit so many times between shelling and bombing the past few days. Why? Its already destroyed.

Also, bombing a cemetery? Seriously? Cant the dead have some peace?

And then comes those double and triple bombing of houses that were already bombed. Why use six+ F16 rockets on a house when the first rocket already blew up the hell out of it? Well, my dear Americans, that’s your tax dollars at work.

Israel bombed everywhere across Gaza. The northern and southern parts took all the heat as usual but also the eastern and western parts weren’t left alone.

Diane Sawyer, of ABC news, made a stupid mistake by airing photos of Palestinian war victims claiming they were Israelis, but thanks to alerted Palestinians and pro Palestinians who immediately pressured an apology out of them on air.

Allot of news was spreading about a possible ground invasion. Palestinian president, Mahmoud Abbass, said a ground invasion will happen in the matter of hours, while Israeli defense minister, Moshe Yaalon, went out and announced the start of a ground invasion against Gaza, but then Israeli news said it will happen on Friday (Today) without mentioning a certain time.

Israel also threatened to cut water, electricity and internet in Gaza to isolate it from the world, not like they haven’t done it before.

In times of this, you try to hold onto the last once of your humanity because its very easy to lose it and become inhuman. Its an inner conflict that goes on every day.

Palestinian life matter, even if the world wants to turn its head to the other side and act like nothing is happening.

It hurts more when you see children dying, or elderly people, or mothers. This war is witnessing family love even in death. Many mothers were killed with their children, a pregnant woman and her infant were killed, a mom died shielding her children who died with her too. Siblings were bombed while they are holding each other or sleeping next to each other, twins too. Dr. Anas Abu AlKas, owns a pharmacy, was killed yesterday after his house was bombed. Anas was an only child, his mom and dad were killed by Israel during cast lead, and he was killed yesterday.

Again, when I choose not to sleep and track the news instead since its too noisy to sleep anyway, I start thinking about life and wondering about humanity.

Egypt opened Rafah border to let Egyptian-nationality holders pass before the wounded. And decided to extend Rafah border’s opening till today to let them pass, but not let the wounded pass. Also, some Egyptian media are actually supporting Israel’s aggression on Gaza.

Not that we ever had hope in Arabs, but the lack of reaction or media coverage is shameful. Some Arabic hotshots on twitter choose to tweet about random stuff instead of covering Gaza news.

We are nearly half way through Ramadan, the first few days were actually amazing until Israel began this new aggression in Gaza. We got so busy with tracking the news that Ramadan is down to fasting for us, it makes me sad because I was enjoying Ramadan this year.

Living through this war is like living through multiple dimensions at once. Life here is normal but not normal at the same time, if you get what I mean (you probably wont unless you live in Palestine or somewhere similar). There is a point where you go through a normal life but then it clashes with the point that you are actually living through a full blown war. Yeah war. Such an easy word to say if you lived through old wars before, but nonetheless a war is a war with all the ugliness and darkness it brings.

US consulate in Jerusalem sent emails and text messages to American citizens in Gaza asking them to immediately depart and offered them assistance but didnt comment yet on Twitter regarding Israel's aggression against Gaza.

Day four has started. If you look at how sunny and beautiful Gaza is this morning, with the birds chirping, you wouldn’t think it’s a wounded city that is being bombed viciously and actually bleeding.

Shout outs: To medics (several got injured), to doctors, journalists on the ground, Palestinians inside and out of Palestine and also occupied Lands of 1948, Pro Palestinians everywhere and to the special friends and people who send their daily support, love, compassion and prayers.

Will we witness an Israeli ground invasion in Gaza today or not? I don’t know. Time will tell so stay tuned.

From a beautiful but wounded Gaza,