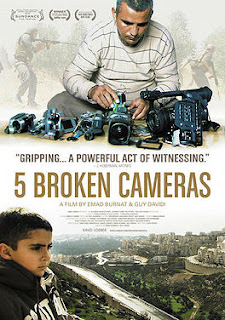 Gaza, April 29, ‘Five Broken Cameras’ is an award-winning documentary  (94 minutes) that was directed and created  by Emad Burnat and Guy Davidi. It’s also an Academy Award nominee for “Best Documentary feature”. The plot is a mere adaptation of reality. Its about a portion of a Palestinian farmer’s life, Emad burnat, and his nonviolent resistance against occupation and oppression which leads to the damage of five cameras. Emad never stops filming even after getting shot, being arrested and facing a lethal accident that left him with serious injuries that took a long while to heal. But will his emotional scars ever heal?

Its important that Palestine was represented at the Oscars this year, although our existence doesn’t need any further proof. Most predicted that the documentary wont win, but its participation was enough.

‘Five Broken Cameras’ won the “World Cinema Directing” award on the category of Documentaries at the Sundance Film Festival, and the “Special Jury and Audience” award at IDFA Film Festival. It was described by The New York Times as “A moving and rigorous work of art”.

You would think 94 minutes are too long but not in this case. I sailed through those long minutes very smoothly yet very emotionally provoked by the organic, real and raw material. It’s a very colorful documentary, lets not forget that black is also a color.

Its narrated by Emad Burnat, who is also one of the directors and the one who took most of  the footage since this revolves around his family, his struggle, his village and his friends. Emad is a self-taught cameraman who found in filming a passion and a way of resistance, nonviolent resistance.

It starts with the birth of Gibreel, Emad’s fourth son, in 2005, Emad gets his first Camera. Gibreel comes with the spark of popular nonviolent resistance in the form of peaceful unarmed protests against the separation wall and the gobbling of Palestinian lands by violent and vicious Israeli settlers who are always backed by the Israeli police and army.

Emad takes us through his first-hand accounts of the gathering and organizing of the nonviolent protests that happen each week in the West Bank and gives justice for the Israeli and foreign activists who help Palestinians a great deal in this peaceful resistance. Many of them have died and got seriously injured by the Israeli Army but they are always there to help Palestinians.

The documentary pinpoints many other crucial issues that the mainstream media tends to neglect:
1-      Palestinian women and the importance of their role in the society.
2-      Children arrests that are usually done by the Israeli army at night, dragging little kids out of their beds (not shown in the documentary, only the arrests are shown).
3-      How vicious and violent the Israeli military is, and how they can arrest anyone unrightfully.
4-      How vicious the Israeli settlers can be, and how violent, especially when backed by the Israeli military.
5-      The amount of teargas that Israel uses against civilians protesting nonviolently is like pouring rain, teargas is very dangerous and suffocating, and if the canister hit the body directly it can cause death.
6-      How the Israeli military jeeps are always around in the West Bank.
7-      How united Palestinians are in both Gaza and the West bank despite the political separation.
8-      How selfless Israeli and foreign activists are, they endanger their lives to protest peacefully side by side with the Palestinians and always pay a high price for it by either being killed or injured or deported.


Perhaps one of the most shocking and frightening scenes was when Bassem Abu Rahmah’s brother gets arrested by the Israeli army, they blindfold him and then shoot him in the leg on a very close range. The documentary included many chilling scenes like the weekly protests and how violent they can get, Emad’s lethal accident that leaves him nearly dead and the arrest of little children and how devastated their mothers would be.

But the most chilling, horrifying and most devastating scene is when Bassem Abu Rahmah gets shot directly in the head and chest with a teargas canister by an Israeli soldier and dies nearly instantly. I lost my breath. The ambiance that you feel whenever the scenes included Bassem was happy and smiley and hopeful. Children loved him and he was always smiling, singing and spreading hope. He was never violent or armed, they killed him when he was shouting “You just shot an Israeli girl”, he was trying to save the Israeli activist. His death shocked the whole village and everyone participated in his funeral.

The documentary is filled with a mixture of happy and sad moments, not really ambiguous, just the contradictions of real life that we all pass through, sometimes on a daily basis. I will be contacting both Guy and Emad for a possible screening and appearance in Gaza, hoping that this will shorten the gap between Gaza and the West Bank.

The documentary offers a native narrative and personal accounts not just a perspective. Its very raw, real and revolutionary. Its shows, even if on a small scale, the Palestinian determination and their defiance of oppression and occupation. Nonviolent resistance has been a trending method in Palestine adopted by many people and backed by international activists.

This documentary turns the Palestinian life from a number or a name into a story and an existence. Emad keeps the camera rolling even during his most intimate moments, he shows us his family and home, he shares his friends with us and fights against occupation with a camera, or shall I say Six cameras? Each Camera has its own story and marks a phase in Emad’s life.

The Audio bridge was on point. Le Trio Jubran’s music made the documentary even more chilling and supported the narration and the events very well.

'Five Broken Cameras' generated a huge media buzz, specially in the US. Many interviews conducted with the directors and many articles tackled different sides of it whether its the production or the funding or the experience. The documentary even made it on HBO's "Veep", a television comedy series. It was mentioned in a provocative way, it sparked a controversy that  many stood with and against, watch the segment here:

In conclusion, ‘Five Broken Cameras’ is a must watch, see it for yourself and tell me what you think. You can watch it online here:

And if you are interested in a more detailed look into the pre and post production info, budget and filming, you can check:

Omar from Gaza
Posted by Omar Ghraieb at 12:26 PM 3 comments: 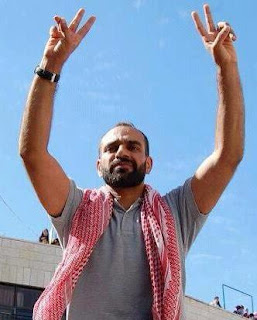 
Gaza, April 23, Samer Issawi is set to be released 8 months from now.In a brokered deal between the Israeli authorities and Samer's lawyer and family, Samer Issawi will serve another 8 months starting from today and then be released and back to his home with no conditions or any foreign exile.

Rumors have been spreading online for a while about so many deals with so many different details but this deal was confirmed by Samer's family and lawyer, which means that it will happen if Israel doesnt break its promise and slam the deal against the wall. Its noteworthy that Israel is unpredictable and doesnt keep promises, so lets pray and hope and see.

Samer Issawi was released back in October of 2011 as a part of Shalit's release deal. Israel released 1027 Palestinian prisoners in return of Hamas's release of Israeli soldier, Gilad Shalit.

Israel then re-captured Samer Issawi in 2012 and held him with no charges or trial. Samer started hunger striking for freedom and till yesterday he passed over 8 months of hunger striking breaking any world record out there. No word yet whether Samer ended his hunger striking or not, but he went back to taking his Vitamins after stopping for a day or two in a step of escalation.

Samer Issawi has seen unprecedented support from inside and outside of Palestine, people everywhere stood by him and showed support by taking the streets and hunger striking in support of him and honoring him in a way by appreciating his bravery.

Perhaps Samer Issawi's release is the most anticipated event in Palestine these days. This is a picture of Samer Issawi's mother after hearing about the deal of her soon-to-be released son: 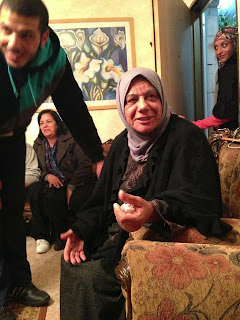 In 8 months from now, and only a week before 2014, Samer Issawi will be released and back with his family so Palestine can enter a new year full of hope and anticipation for freedom and justice.

Samer Issawi turned into an iconic figure, a hero and a representative of Palestine's steadfastness and strength for choosing to starve himself for freedom. Palestinians look up to him for he has given them hope and faith in a better tomorrow, Samer will be free and Palestine will be free.

Samer Issawi lost allot of weight and his health is in mere danger, he will need a long rehabilitation time after his release to revive his weak body who kept fighting while being fueled with a strong will and a thirst for freedom. 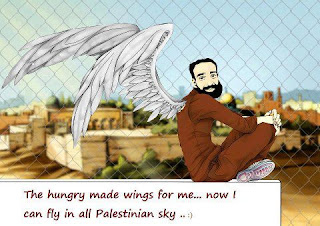 From Gaza with love and hope,