A Different Roar in Gaza 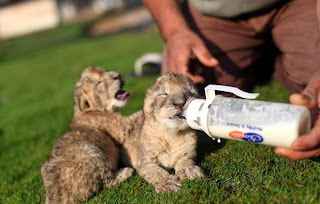 This week, the Gaza Strip witnessed the unprecedented birth of two African lion cubs at the Beesan Zoo, a facility in the northern part of the densely populated Strip that was built and opened by the Islamist Hamas movement. But just three days later, the cubs died, from unknown causes.

The mother lioness, who was discovered to be pregnant nearly six months ago, received extensive medical care, including vaccines, vitamins and good nutrition, before delivering the cubs naturally.

“Immediately after their birth, both cubs were moved into a warmer room to get the necessary care and they were regularly checked by a professional team of local veterinarians,” Shadi Hamad, general manager of the zoo, told The Media Line. “We called the cubs ‘Fajr’ and ‘Sijeel’ -- ‘Fajr’ after Hamas’s Fajr 5 rocket that was launched into Israel during the second war on Gaza, and ‘Sijeel’ after the name that Hamas decided to call the second war on the Strip that took place in November of 2012.”

Sijeel is also mentioned in the Qur’an as fiery rocks that rain down on unbelievers.
The birth of the cubs had taken Gaza by storm, with their pictures going viral on social media. Palestinians say it’s nice to have some good news out of the area that is better known as the site of heavy clashes between Israelis and Palestinians.

“The lioness got pregnant one year ago but suffered a miscarriage during ‘Pillar of Defense’ in November of 2012,” explained Nahed Al-Majdoob, head of security at Beesan Zoo, referring to an eight-day military incursion in Gaza by the Israel Defense Forces with hundreds of Israeli air strikes on Gaza. Hamas fired hundreds of rockets at Israeli cities. “She suffered psychologically, which affected her physically.”

The parents of the cubs are the only lions in Gaza. They were smuggled in from Egypt four years ago, when they were only three months old, through the Rafah tunnels, which previously existed on the border between the Palestinian territory and Egypt. The Egyptian and Israeli armies have since destroyed most of these smuggling tunnels.

“They suffered at first because they were accustomed to the tropical weather of Africa, their origin, while Gaza has a cold winter,” Hamad said. “But they survived.”

The new cubs, too, had to be warmed due to the current cold temperatures in northern Gaza.

Mohammed Jumua owned a small zoo that was completely destroyed by an Israeli rocket in 2008.

“I lost everything,” Jumua told The Media Line. “Most of my animals died. I paid extra to get the animals smuggled into Gaza from Egypt. My collateral damage reached half a million dollars. I was devastated and broke.”

Dr. Saud Shawa, owner and founder of Vetco, Gaza’s first veterinary services center and clinic, said that Gaza doesn’t have the proper capabilities to raise cubs or lions. He predicted that if not done carefully and correctly, the lions could die or become dangerous. His prediction came true three days later.

“Cubs need special care, vaccines, nutrition and vitamins. Not all of them are available in Gaza,” Dr. Shawa told The Media Line. “Raising lions isn’t easy and needs to be done professionally and safely based on a background and knowledge of that tropical world.”

First appeared on: The Media Line