I recently was invited to a workshop discussing the Palestinian dialogue and what destiny is waiting for it, I found it very useful for non-political people like me and I thought it would be helpful and eye-opening if I share it with you. 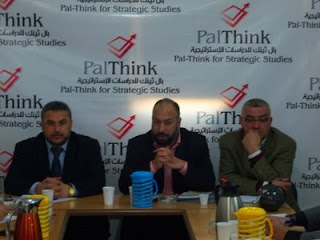 The invitation was from MR.Omar shabaan, the president of Pal-think organization http://www.palthink.org/. and the workshop was held at the organization's headquarter in Gaza.

PAL Think for Strategic Studies is an independent non-profit, non-political, non-governmental and non-sectarian think and do tank that aims to stimulate and inspire rational public discussions and consensus for the well-being of the Palestinians and the Region. PAL Think was established in 2007 in Gaza-Palestine by group of Palestinian researchers and community activists who have intimate relations and diverse knowledge of the Middle East, its current problems, potentials and possibilities. ( http:www.//palthink.org. )

MR.Omar shabaan is a leading Palestinian figure who glamoured in the world of economics and entrepreneurship and was one of the first Palestinians to shine in those fields. He didnt stop there but decided to start an organizaton to give back to his community and help this community grow, understand and aware.

Omar Shabaan is a senior economic advisor, with over 15 years of experience in management consultancy and private sector development. He participated in various international conferences on economic issues. He has developed manuals and published more than 100 articles in local newspapers and on international websites. During the past few years and on a regular basis, he has been invited by local and international NGOs to speak on various economic, social and developmental topics such as; the Israeli disengagement plan, PA national budget, SMEs development, free trade agreement and industrial zones. He has been interviewed by many well-known international newspapers such as Lemonade, New York Times, the TIMES, Al-Ahram weekly, Washington Times, Christian Science Monitor. Also he has given interviews to many TV and radio stations such as Al-Jazeera, BBC, ABC, NBC, Monte Carlo and Nile news etc. 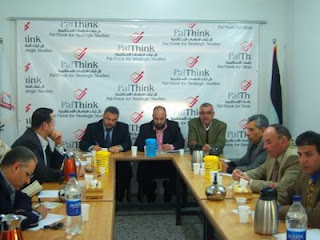 The workshop was given by two of MR.Omar's friends and main hosts:

The guests and attendees were leading Palestinian personalities in the world of media, community activists, owners of organizations and people with militant experience.

MR.Omar Shabaan started the workshop with some strong words of welcoming and a summary about Pal-think Organization:

" We welcome you all, as many local; international, national, and worldwide initiatives are pressuring and supporting the dilaogue of reconciliation. 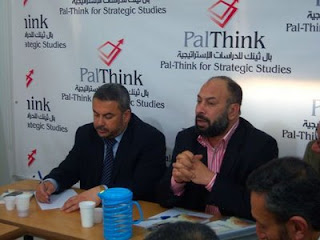 Pal-think is honored to be one of the leading active organizatons to achieve and support the reconciliation between ( FATAH and HAMAS) and played a role in exchanging messages between both parties.

We found real moves and good intentions of both parties to help achieve reconciliation and help the dialgoue succeed so we are conducting that workshop because we believe the Palestinian Civil community has the right to know where is the dialogue now, what happened in Egypt, what is the reason behind postponing it and what destiny is waiting for it." The main hosts both agreed on good intentions and on making the utmost to help this dialogue succeed and that the Palestinian benefit and utility is the main goal of bothparties.

Then a debate started between both hosts, each trying to illustrate and expess his party's beliefs, goals, points of disagreement, needs, tasks, worries and visions. 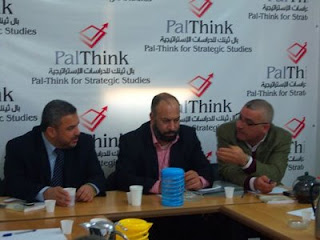 The main discussed issues in this workshop were the points of disagreement and here is a glimpse of this debate:

MR.Ashraf Jomaa : Main issue of Disagreement is the elections and everything around it. We want this elections to be a listing - percentage elections ( you elect a list of people that represent either a certain party or a list of indepenents or represent a certain political program), This will help every one join this elections But HAMAS is against this method and demands a mixed election ( were many parties could join a list and the percentage of rebate exceeds 2%) which will put us in the same zone of conflict since not every body will join independantly and only HAMAS and FATAH will be the main lists.

MR. Ismail Radwan: mixed elections will help all parties more and in the same time help protect HAMAS representives and elected personalities since HAMAS is the number one party that isreal and zionists want to kill and imprison. we entered the listing elections and won it but where are most of the elected people of HAMAS now? They are imprisoned by Israel. Its our right to protect our people.

MR.Ashraf Jomaa: Security is also on of the issues we disagree on. we have agreed on hiring only qualified people overlooking their political belonging and start re-constructing all security sections.

the disagreement came when we wanted to start with the security sections in Gaza then the west bank when HAMAS disagreed and demanded the start to be across palestinian in the same time.

MR.Ismail Radwan: We won the elctions so i think we have the right of taking the position of the prime minister and anyway this issue willbe discussed more with the upcoming dialogue sessions. we also want to discuss the political program that has the political phrase of ( respect and commitment). we wont accept this because we wont aknowledge Israel or commit with it since they dont want to respect or aknowldge us. 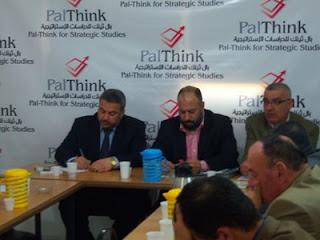 Also if we unite and assemble a strong government then we will force the whole world to talk to us, cooperate with us and respect us.

In the end of the long debate that i summarized, both hosts agreed on looking forward to the upcoming dialogue sessions and that the postponing comes from the need of more time to work on the points of diagreement and solve them.

Also both agreed on a point that the dialogue came so far and achieved a big advancement that the old sessions lacked.

They were optimistic and believed in announcing the success of the dialogue soon and that good intentions along with good deeds will result to a near reconciliation. they both wont comprimise with any princicpals but will work on the disagreement points.

I will end this article with a question I wanted to ask both sides but couldnt because of the lack of time, this question now is open for every one to answer:

" I represent a huge class of palestinian people whom are non-political when I ask, DONT THE PALESTINIAN PEOPLE WHO SUFFERED ALOT IN BOTH CONFLICTS ( PALESTINIAN - ISRAELI CONFLICT AND PALESTINIAN - PALESTINIAN CONFLICT) DESERVE FROM BOTH PARTIES TO COMPRIMISE AND HELP THE DIALOGUE OF RECONCILIATION SUCCEED NO MATTER WHAT IT TAKES SO THEY CAN BREATH, LIVE AND FEEL SAFE? "