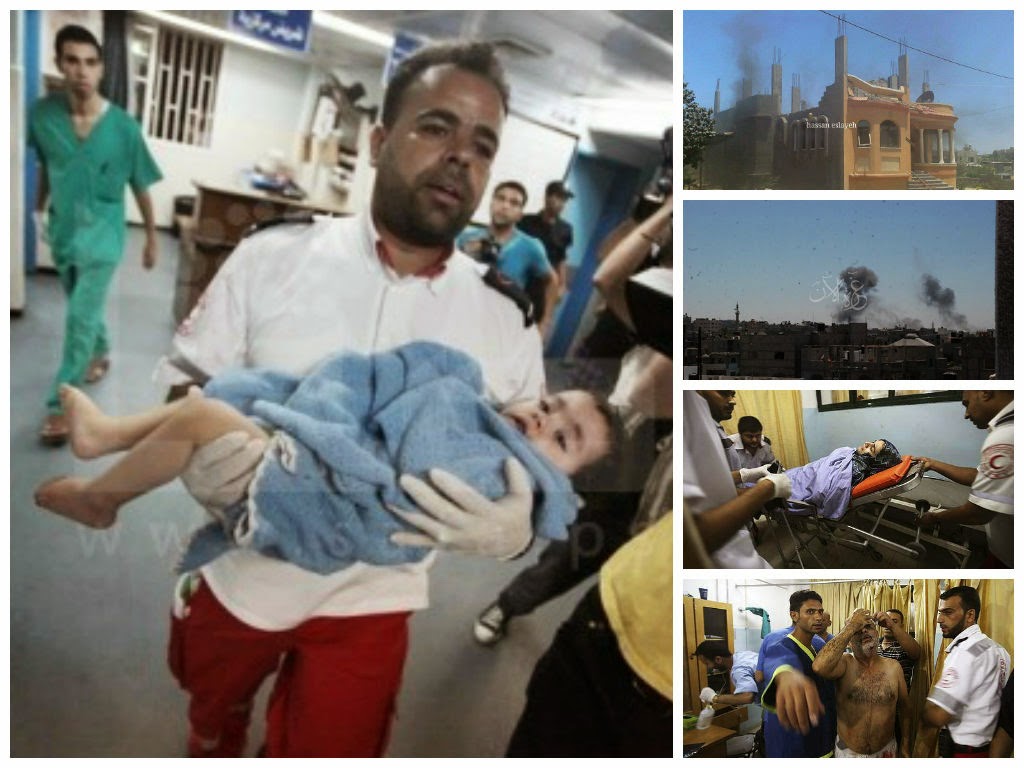 Gaza, July 8, Israel launched a new aggression\operation\offensive against Gaza and decided to name “Protective Edge” also known as “Solid Rock”. Israeli warplanes, tanks, drones and warships participated in bombing places across Gaza all day long. This makes it the third Israeli open war against Gaza in 5 years or less. This isn’t a report, this is a personal account of what I lived today through the first day of Israel’s new aggression on Gaza.

Israel started bombing houses this time, deliberately, with no intent to apologize or stop. So many houses got bombed that we lost count. Families whose houses got bombed are: Hashash, Za’bout, Yaseen, Shabat, Agha, Kaware’, Al Ghalban and a few others. Israel committed a massacre when they bombed Kaware’ family house directly when people were forming a human shield around it to protect it from being bombed. Many died and got injured, most of them were children.

Israel attacked lands, mosques, houses, cars, motorbikes, free zones, humans and pretty much anything and everything in Gaza. You can hear consecutive explosions across Gaza, even if they far away, ground keeps shaking, the house keeps shaking and the windows nearly fly.

Israel admitted bombing 90 targets a few hours ago. And they never stopped.

Ministry of Health, Gaza, said a little while ago, Israel’s new aggression left 17 dead and more than 100 injured in less than 24 hours. And far from over.

Israeli PM, Netanyahu, said that a ground offensive is being set up. Israeli government called upon 40 thousand or even more reservists to be ready for duty to escalate the aggression against Gaza.

Among the dead and the injured are allot of children.

No place in Gaza is safe, Israeli bombing is louder and stronger than ever which makes it even more dangerous especially that houses are being targeted now.

Its expected to get worse tonight, so stay tuned.
Posted by Omar Ghraieb at 9:17 PM