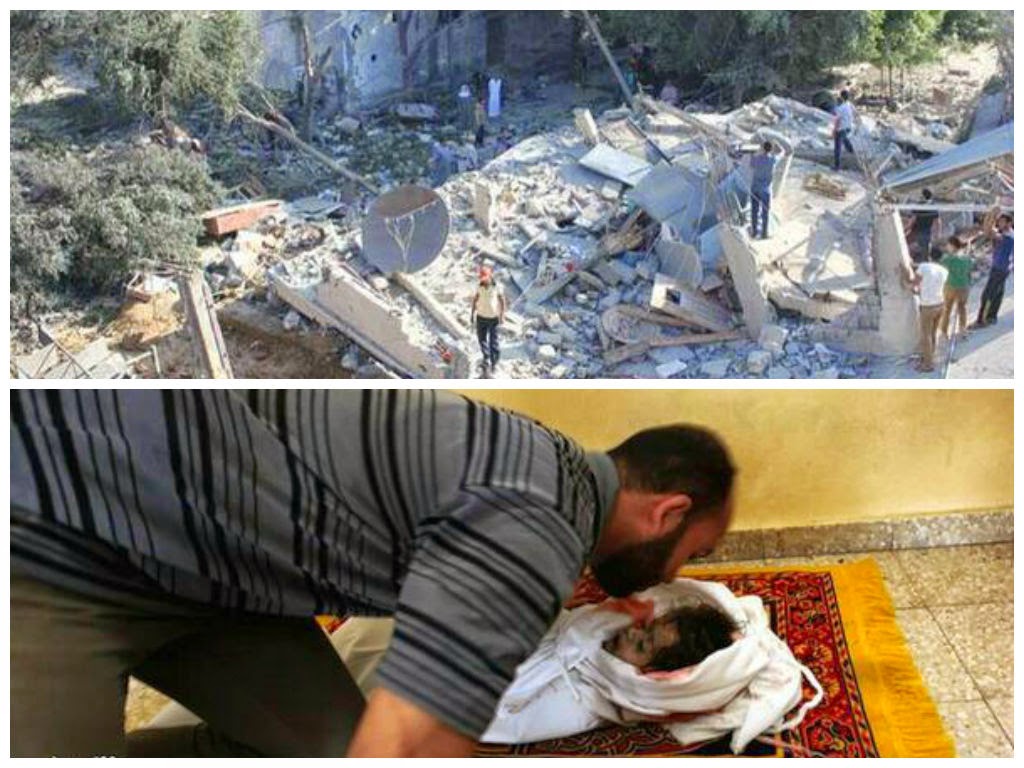 Gaza, July 12, Israel launched a new aggression\operation\offensive against Gaza and decided to name “Protective Edge” also known as “Solid Rock”. Israeli warplanes, tanks, drones and warships participated in bombing places across Gaza all day long. This makes it the third Israeli open war against Gaza in 5 years or less. This isn’t a report, this is a personal account of what I lived today through the fourth day of Israel’s new aggression on Gaza.

I wanted to write this blog earlier, since we are half way through day five but the power was out and I had no battery. Another intense night in Gaza under the nonstop bombings of Israel. What a day. Actually what a week. Also, since we are at it, what a night.

I will sound like a repeated record for a minute when I saw Israel bombed everywhere across Gaza and the targets were mainly houses, although the targets did expand to include new things, but that’s the reality of daily life here through this barbaric Israeli war or offensive (call it whatever makes you happy) against Gaza.

The Israeli targets in Gaza remained the same but expanded to include a handicap association Northern Gaza, which caused the death of two or more handicapped females. Mosques and houses were bombed as usual, also cars and motorbikes and all the usual targets. Oh and humans ofcourse. Another cemetery was bombed, and the old cemetery was bombed again. Basically, everything in Gaza is a potential target.

Latest official statistics from different official governmental and media sources say: 124 Palestinians have been killed, 935+ others got injured. Israel carried out 2025 bombings across Gaza so far, or even more, using 400 tons of explosives every day, give and take. Yesterday, people noticed a fog covering due to smoke bombs fired from Israeli tanks. It might contain poisonous gas, cast lead flashbacks. Most casualties (dead and injured) are women and children, as usual, and dare to tell me they aren’t civilians.

I will not lie and say life here is normal, but it hasn’t stopped either. People do be careful and stay homebound (not that it saves you or anything, no place here is safe) but also go to work and buy groceries and the usual stuff. Its Ramadan, although its hard to feel the blessings and magic of this holy month through all this madness. We went through similar situations to the extent that each one of us become a walking guide book on how to survive though war, and also sound experts. You know to immediately stalk medicine and all the basic needs like water, bread and canned food when such things occur (they usually occur out of nowhere) but during times like this, even basic needs become trivial.

Many explosions were nearby to where I live, but one explosion was so nearby that I lost hearing for a few minutes. But it came back, thankfully.

Israel didn’t start a ground invasion yet despite the media declarations.

Oh, an explosion just happened nearby, ok, back to writing.

800 foreign passport holders issued requests of departure to leave Gaza through Erez. I guess some people just cant handle it.

Egypt opened Rafah, let some bad injuries through but their priority was letting through Egyptian citizens in Gaza. Despite some bad Egyptian media, celebrities, public figures and people who actually support Israel’s war on Gaza, many others actually support Gaza and are highly criticizing those who don’t.

Arab leadership and governments are disappointing as usual. No reaction. In some Arab countries, regimes oppress protests in support of Gaza even.

Heartwarming protests across the world held Palestine flags and protested for Gaza, which is always heartwarming. We are so grateful. But perhaps my favorites are London, Yemen and Japan.

Britain’s “Blair” will arrive to Egypt to discuss a potential ceasefire, Obama is also working hard on obtaining one by pushing Qatar and Jordan and Turkey into extensive talks of forming a solid ceasefire.

Mainstream media remain either silent or biased towards Israel’s massacres in Gaza, which isn’t new at all, but some media and journalists are doing a great job.

Another huge shout out to medics, doctors and journalists on the ground who risk their lives to shed a light on others.

Do I wonder about the time frame of this aggression or when will it end? Maybe I do. But when you are in it, you are caught up into living the moment. Its puts you in a certain mode. I don’t know how to explain it.

Last night and during the first hours of this morning the Israeli bombing intensified. Israeli warplanes, warships and tanks were all bombing Gaza at once. It was kind of surreal, like you are watching an action movie, except you are actually living inside it, or living it.

I will post below some useful links regarding most of the things I mentioned here, feel free to check them out.

From Gaza, survived another day,

GRAPHIC VIDEO: WARNING: Not for those with weak herts: Heart shattering video of a Palestinian father in Gaza trying to wake up his dead child, he tells him to wake up and see the doll he brought him:
http://www.alwatanvoice.com/arabic/news/2014/07/11/565748.html

Pictures of some of the worldwide protests in support of Gaza:
http://www.dawn.com/news/1118609/view-of-worldwide-protests-against-gaza-assault