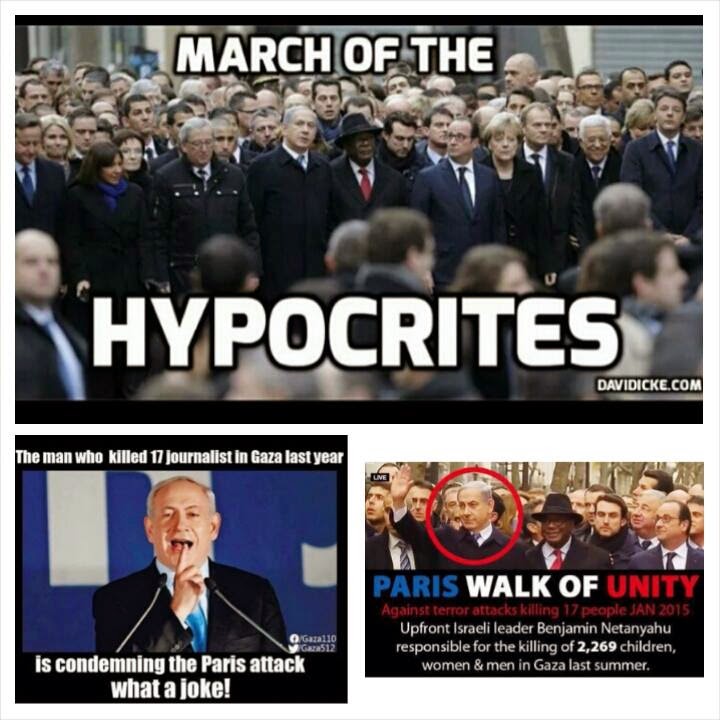 World leaders (including Arabs, and the Palestinian president) marched in Paris to support the “Freedom of Speech” and stand against terrorism. Netanyahu, Israeli Prime Minister, was front raw ofcourse because he is against violence which is why he waged a war on Gaza not long ago killing hundreds, including tens of children. Netanyahu loves “freedom of speech” so much that he killed 17 Palestinian journalists during the latest war on Gaza.

As if the death of Muslim officer, Ahmed Merabet, who was doing his job defending Charlie Hebdo HQ.s wasn’t enough, and the French Muslim Hero (whom, in reality, doesn’t have the French Citizenship) that saved Jewish lives during the attack on a Kosher supermarket, still isn’t enough. I will have to once again say I am against Paris attacks, as a Muslim and a human being. Although words are louder than actions, yet nothing defends Muslims enough no matter what they do or say.

Charlie Hebdo will start printing one million copies instead of the usual 60 thousands. Talk about publicizing and monetizing tragedy. Just wondering why no mention in the media about Nigeria's Boko Haram Killings? Arent those also Islamic Extremists?

Only few months ago, many innocent lives were harvested in Gaza by the evil terrorism of occupation including tens of children and a number of journalists. Why didn’t any world leader come to Gaza and march? Why didn’t Arab leaders visit Gaza and speak up against Israel? Why did my own president visit Paris yet didn’t visit Gaza after it was burned by Israel?

The answer is simple and easy. Our lives don’t matter. Our blood is cheap. As humans, we are less. I cant help but respect Europe for honoring their blood and forcing the whole world to do so. But as an Arab, I feel ashamed and let down. We once were a nation that was the most advanced, respected and imitated. But now, our blood is worthless, even in our own eyes.

Paris urged Netanyahu not to come to the march, he wasn’t invited. Haaretz wrote about it. Hollande, the French President, wanted to focus on the matter in hand and didn’t want any other spotlight to deviate the attention to other mundane issues, say for example the Israel-Palestine conflict. Yet, Netanyahu, and as usual, did whatever he liked without giving a damn about what others think. So he attended uninvited. Just like he keeps killing Palestinians. The world won’t stop him after all.

Only then did France invite the Palestinian President Mahmoud Abbas, who was also asked not to come at first. And ofcourse, Abbas rushed over there. So we are not considered equals. If Netanyahu didn’t come uninvited, Abbas wouldn’t have been invited. Why did Abbas decide to go march and walk side beside with leaders who failed Palestine so many times? Why didn’t he visit Gaza after the Israeli war? Its beyond me. Oh, and Netanyahu was only a few feet away.

Which brings me to a very sad melodramatic conclusion: The world is so obviously blunt about my worth as an Arab Muslim Palestinian. I AM NOTHING. Many countries think I don’t exist, and those who recognize my existence do it in a symbolic way. I am already considered as a terrorist even when I am not. As a holder of Palestinian passport, I need a visa everywhere, and nowhere would grant me a visa unless I pay loads of money or ask for a divine intervention. And when\if I make it, I will be interrogated, searched and perhaps strip searched at most airports. I will have a target on my back everywhere I go. I am under the microscope. I am forced to respect and support all freedoms even though the world denies me my basic human rights. I will be labeled, narrowed down, ridiculed and automatically seen as a suspect of any incident around the world. Freedom of speech is exclusive for the West.

Ironic how I feel like my life’s mission is to fight for human rights when I, myself, don’t exercise any basic human rights. It’s actually funny and a little melancholic. Don’t you think?

But the question remains: Till when will I keep fighting for ultimate equality when most don’t even care about my blood, worth or rights? I honestly don’t know.

I might get fed up one day soon. And I might end up in California, become a plastic boy and binge on Sangrias all day. Oh wait, that’s only if the US gives me another Visa. And I don’t end up being jailed or spied on because I am an Arab and a Muslim. Sigh. Now even silly dreams are not an option.

From Gaza with whatever love left inside,