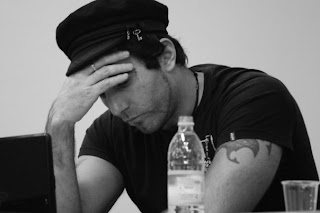 Gaza, April 19, Hamas police forces announced Today that they surrounded a building in Nuseirat camp where they were tipped that the 3 suspects who are behind Vittorio Arrigoni’s death are hiding in.


Then they engaged in armed dispute before two gave up and were captured from which 1 got injured.

As for Abdel Rahman Breizat, the Jordanian suspect, shot himself before his capture and said that he threw a grenade on the other two suspects to kill them so they wont get captured and speak about the direction behind Vittorio's death. Al Omary was killed minutes after his capturing. the third got injured.

Ministry of Interior spread the pictures of those 3 suspects across Gaza, Gazans spread those pictures widely and vowed to turn them to justice.

Gaza is now very happy to see those murderers get captured. Justice is served.